Today I’m starting the series of Spring-Security articles, and most of them will be references from web-sites and book named “Spring-Security” from authors Mick Knutson,Robert Winch and Peter Mularien. Before going into an example of Spring Security lets clarify why do we need spring security.

Why do We Need Spring Security ?

The internet based hacking has been born with the internet itself and no need to go for detail history about it. They guys who has long experience of web development already seen many kinky ways of internet exploitations. They already have developed skills to stand against those attacks and when they develop something they can write the code that protects agains those attacks. But human factor still remains and developers may forget put the measurements against some existing attacks, then it repeats again. That is ok if the professional forgot to put some prevention code for specific attack, he can remember later and recode it. But what about newcomer, who has no idea about it, he should learn from seniors and it may take a years and years. That is why people started developing the frameworks, that are already contains those preventions by default. There are many such frameworks out there, and many more coming. Here we will talk about Spring Security, which is basically security framework that works and developed particularly to work with spring framework.

Here some are the features provided by default:

First of all we have to integrate Spring Security into our code by declaring it in the gradle configuration file build.gradle:

sometime it may become necessary to declare the version of the package. For Spring Boot users who love to just easy start with starters the following starter adding line would be enough:

Most basic start of the spring security is done by declaring the configuration bean:

In above code we have two configure methods overriden, and they will block from accessing to basically any url “/**” all users who doesn’t hold “USER” role (defined in a second configure method). Next obvious question how do we define which role who has, that is defined in a first configure() method. Since this is demonstrative example the authentication is performed in memory.

The Main Processes of the Spring Security

Roughly we can consider Spring Security as a two separate processes (anyhting out of these two can be considered as an additional feature): 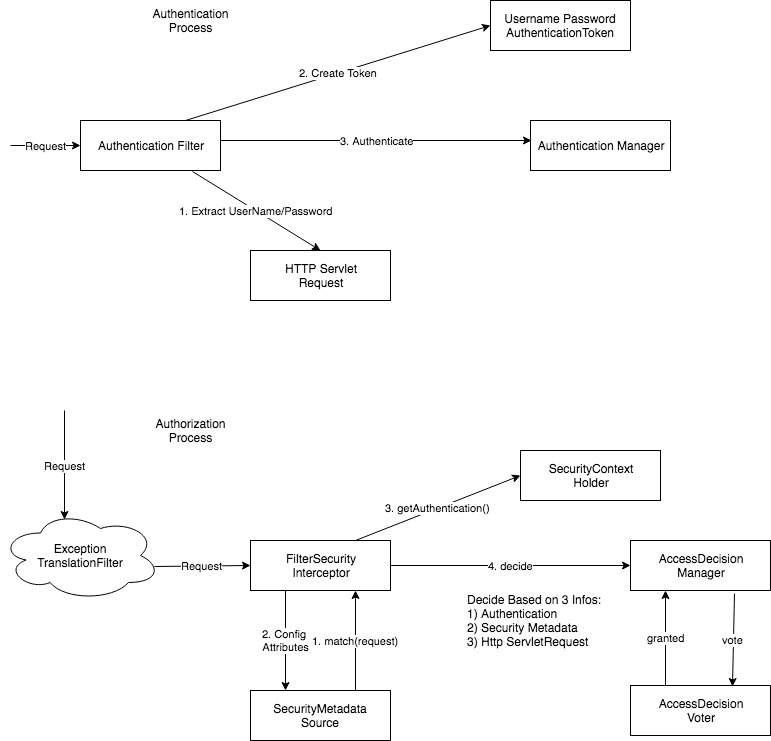 Depend on the provider the usage of the above created token would be different. For example DaoAuthenticationProvder is one of the provider that uses UserDetailsService for retrieving the user details based on username. Most of the cases the details are extracted from DB.

I think it would be little bit off topic, but i think i have to mention the variable hideUserNotFoundExceptions is something that hides the internal messages. So if in UserDetailService layer you would throw some exception which should be seen by the end user, then you should false this variable. Otherwise the end user will be getting only BadCredentialException. It can be set at the moment when you register your authentication provider object by setHideUserNotFoundExceptions(false). For Details

In most cases the default AccessDecisionManager is AffirmativeBased (if no voters decline then access is granted). Any customization tends to happen in the voters, either adding new ones, or modifying the existing one. ConfigAttributes can be represented in Spring Expression Language (SpEL) expresssions, for example isFullyAuthenticated() && hasRole('FOO'). AccessDecisionVoter can handle the expressions and create a context for them.