Given a graph which represents a flow network where every edge has a capacity. Also given two vertices source S and sink T in the graph. Find out the maximum possible flow from S to T with following constraints

The following is a simple idea of the algorithm 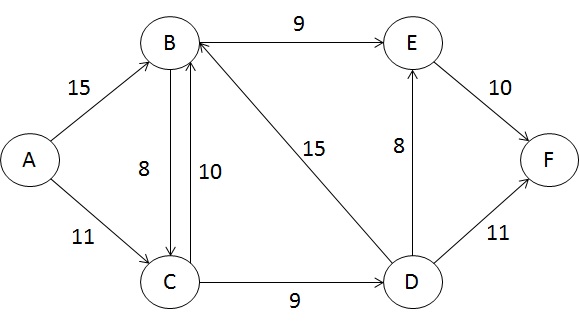 **Not so clear, especially the 2nd one “Non-empty backward edges” :(, but we will get into it later in our example.

What Happens If Naive Algorithm is Applied

Lets assume we have simple graph with four vertices and five edges: 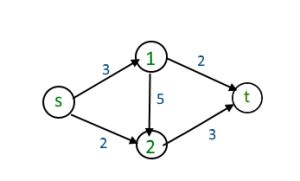 When the Naive Greedy Algorithm (GA) approach is applied the maximum flow may be not produced. It is well known from the definition of the greedy algorithm that every step it tries to grab maximum value. Which is not always brings to the collective maxmum solution. 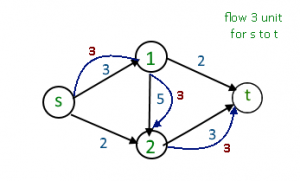 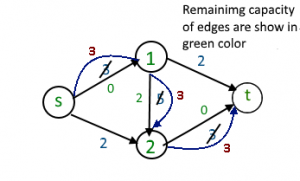 The main novelty idea behind the Residual Graph is that algorithm allows “undo” operations. When we flow back on the edge (means go agains the direction of the arrow) then we add the flow number to the edge value. Main constraints here is that adding up number should not be bigger than original flow value of the edge.

We are given the following graph:

Here, S is source and T is the sink which is target destination. Our goal is to calculate the maximum flow for this graph

The chosen path is called augmentation path, and each edge has different capacity. For example S -> A has capacity 10, A -> D has capacity 8, D -> T has capacity 10. The edge A->D with capacity 8 is the smallest among other edges. That is why it is called minimal cut, more traditionally we call it a bottleneck. Now every edge subtracts the bottleneck (in this case 8) from its capacity. That is why we can write the subtracted 8 on the right side of the slash. As a result for S->A we have “8/10”, which means now this edge has capacity 2. Maximum Flow is the summation of the all “minimum cuts” at every step. We will get back to maximum flow later again.

Lets, continue in a same fashion, this time we go by lower edge S->C edge

Now we chose the path S->C->D and when we reach D there is no direct way to the target, because the edge D->T is already full and has 0 capacity remained. The maximum flow definition has mentioned above “Non-empty backward edges”, which allow us to flow backward against the arrow. That is why D->A path can be used, as shown here:

Let’s dive into details, and analyse whats happened here. The edge A->D already been full 8/8 (means 0 capacity left). But when we flow backward D->A we take away used flow that is why it becomes 4/8. In another word, we are adding the capacity to the edge. Yeah it sounds little confusing, but stay tuned. When we flow back and the minimum cut (bottleneck) for this step has been selected as 4 (because of A->B bottleneck), that is why now the edge A->D has capacity 4. It is kind of cancels out previous usage of the A->D capacity. Even though it sounds strange, mathematically it is absolutely correct and I think this is the key point of the whole Maximum Flow algorithm.

**Important to remember that it is possible to flow back on the edge only if it has been flewed forward before. The value for flowing back cannot be bigger than the already used capacity. Which means if the A->D has not been used in previous steps and still had full capacity then we could not flow back from D->A

Now, we can continue the algorithm

Now there is now way for flowing from S->T by augmenting any path. That is why we the algorithm stops here. Now we can list out all the augmented paths and bottleneck capacities on that step: 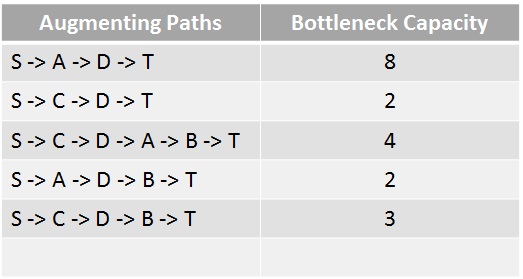 Summation of the bottleneck capacities for each step gives us the maximum flow result for this graph and it is 19.

There are dozens of real world problems that can be formed as Bipartite Matching. One of the popularly used one is Applicants and Jobs (mentioned by Robert Sedgewick in his Coursera MOOC): 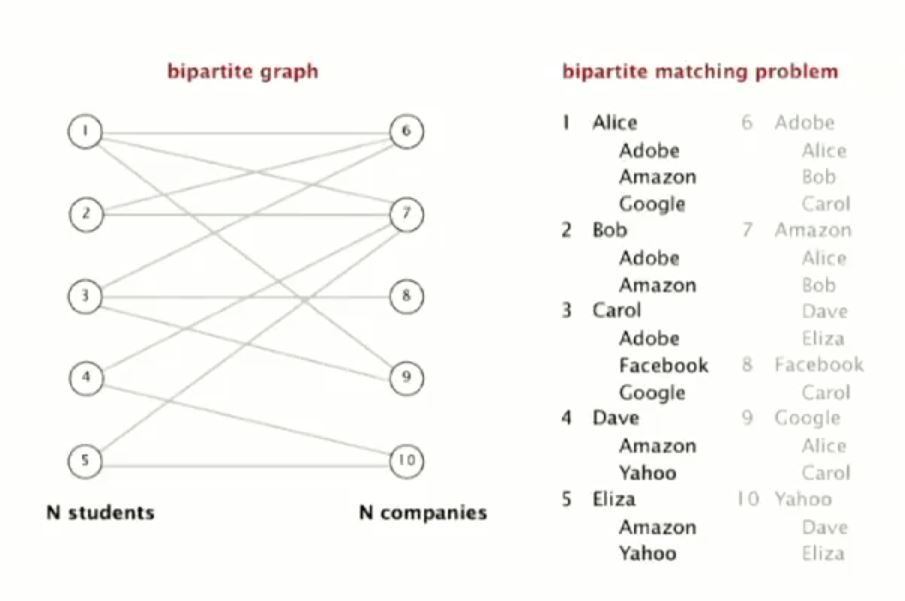 Lets design it in the graph, using VisualAlgo web site, which I found really good tool for quick check: 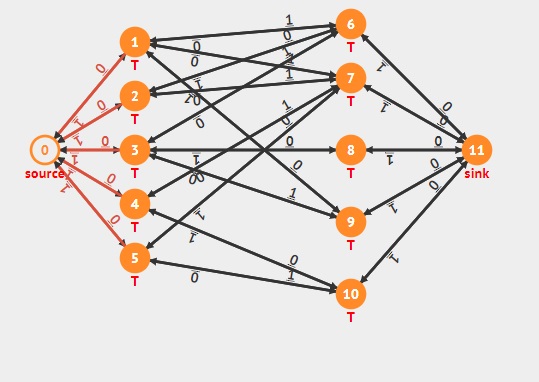 After designing the graph using VisualAlgo we can quick-run the algorithm for the result or check the solution step-by-step where each path augmentations are illustrated. Here the final solution and it perfectly matches with Robert Sedgwicks solution. 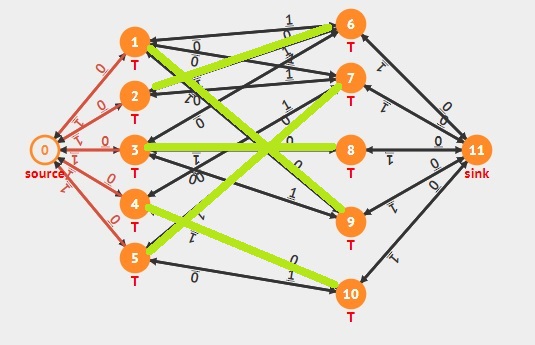 Try to Apply to Web Services

I have been looking around for different kinds of application examples, especially try to find web services related application. Couldn’t find one and decided to make my own.

To make it look more examplistic (note sure such a word exist), lets give the weight to each edge, relative to the maximum load of the each server can handle. We are considering heterogeneous network and nodes.

Now everything looks settled and ready to design the maximum flow. The goal of using maximum flow algorithm is to calculate what is the capability of this system and where are the bottlenecks.

We have designed our network using another good online tool. Here you can see the source code of the model:

Lets, run the simulation and find out the maximum flow.

Here, we can see the maximum flow is equal to 33. Which is not something what we have expected. At the input we have 40 users connected, and on the right side we have the database with capability to serve 40 users. But somehow we are ending up serving only 33 users.

By applying maximum flow algorithms we can analyze and find bottlnecks of our systems.