As a developer I think Netflix done great job about bandersnatch. They have designed a complex story map, where the story flows and the user who watches the movie can choose the direction of the flow. Definitely there will be many critics about this decision of the Netflix. Because many people will think that movie is the art which must created by artist and watched only with a single flow. What Netflix has done with bandersnatch is new type off art called interactive movie, but it sounds more like a description to the technology. Could be given more fancy specific name.

The story happens at the beginning of computer age (80’s I guess) where young game developer Steffan gets new idea for the game. He tries to implement some book game called bandersnatch. The book itself is more like a game where you read the pages and depend on your decision you go to different pages and story evolves based on your choice. He tries to implement that story book as a computer game. Nothing complicated and everything goes well. While movie plays we are as watchers given some choices to make. Yeah that sounded simple for me. It means they have taken multiple shots of the same scenario with different outcomes.

Steffan has some kind of psychological problem and regularly sees psychoterapist. He starts complaining that he is out of control of his decisions. He claims somebody controls him. When he gets back home to proceed programming his game we are as a watchers giving him and order. He gets angry because he receives order from someone and he starts shouting around and ask who is that, who controls me? Here the creepy moment starts we are the one who controls him. I mean till that moment I thought I just have to make choice to watch what will happen to the guy. But then it becomes clear that I’m also involved in the movie somehow. He gets involved in simple conversation with us through his monitor. And we get choice to tell him that we are watching him through the netflix. And since it is 80’s there is no such thing netflix online streaming service. So obviously he asks what is the netflix? We can choose to tell him more about it or just stop talking to him. Anyway the story gets quite complicated and i started feeling that I’m totally in involved in this story. It is not a movie, not a game but something new

After watching movie it left some new kind of emotions in me. Curiosity started pushing me with new questions like: how many outcomes this movie could have? did I watch every scenario outcome? did I finish the movie right? what would happen if I choose another path? Those questions got resolved when i found the map of the story, and it is quite complex one. 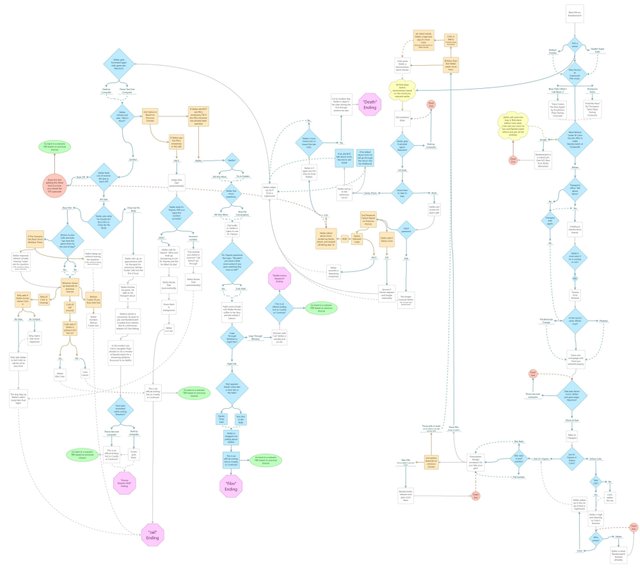